It is always a pleasure to be able to design and install an  outdoor lighting system to illuminate a beautiful home,  outdoor living area and grounds. But it is a rare treat in our  business to be able to illuminate a home that is on the  National Historical Register. We have done four in our  history, but this week we completed a project that has  historical significance dating back to the Civil War and a    home that was built in 1792. This is the oldest home for  which we have designed and installed an outdoor lighting  system to illuminate the architectural features of the home.

The Coldbrook Farm is located in historic Chambersburg, Franklin County, Pennsylvania.  According to the owners, the home was built in 1792 by circuit Judge Henry Riddle as his summer home.  His main residence was downtown because it took too much time to travel one mile by horseback to the courthouse in Chambersburg, a mere 2-3 minute car ride today. 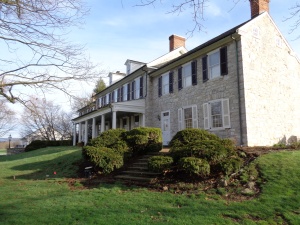 Chambersburg, which traces its history back to 1730, played an important role in the Civil War. It was the only major northern community that Confederate forces burned during the war. “Remember Chambersburg!” became a battle cry for the Union Forces after the burning took place.

The original house at Coldbrook Farm was spared as it was just on the outskirts of the city.

According to Wikipedia, during the American Civil War on October 10, 1862, Confederate Maj. Gen. J.E.B. Stuart, with 1800 cavalrymen, raided Chambersburg, destroying $250,000 of railroad property and taking 500 guns, hundreds of horses, and at least “eight young colored men and boys”. They failed, however, to accomplish one of the main targets of the raid: to burn the railroad bridge across the Conococheague Creek at Scotland, five miles (8 km) north of town.

During the early days of the 1863 Gettysburg campaign, a Virginia cavalry brigade, under Brig. Gen. Albert G. Jenkins occupied the town and burned several warehouses and Cumberland Valley Railroad structures and the bridge at Scotland. From June 24–28, 1863, much of the Army of Northern Virginia passed through Chambersburg en route to Carlisle and Gettysburg, and Robert E. Lee established his headquarters at a nearby farm. 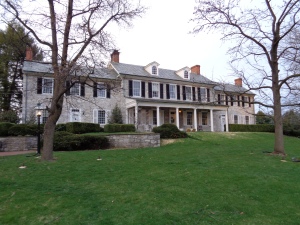 The following year, Chambersburg was invaded for a third time as cavalry, dispatched from the Shenandoah Valley by Jubal Early, arrived. On July 30, 1864, a large portion of the town was burned down by Brig. Gen. John McCausland for failing to provide a ransom of $500,000 in US currency, or $100,000 in gold. Among the few buildings left standing was the Masonic Temple, which had been guarded under orders by a Confederate mason. Norland, the home of Republican politician and editor Alexander McClure, was burned even though it was well north of the main fire.

Of additional and significant interest is that the Confederates camped on the property prior to the Battle of Gettysburg. Reports have it that General Lee’s tent was set up and used just where the current mailbox to Coldbrook Farm is located today. One of the attractions to the property was the stream that still exists today which provided a plentiful water supply for the Confederate horses.

The home has been added to over the years and was classified as a Georgian Federal in architectural style built with local limestone.